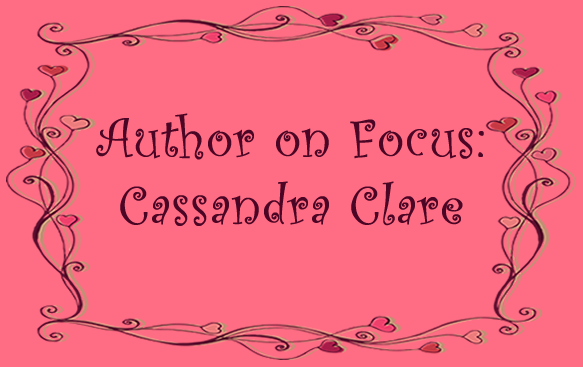 Cassandra Clare was born to American parents in Teheran, Iran and spent much of her childhood travelling the world with her family, including one trek through the Himalayas as a toddler where she spent a month living in her father’s backpack. She lived in France, England and Switzerland before she was ten years old.

Since her family moved around so much she found familiarity in books and went everywhere with a book under her arm. She spent her high school years in Los Angeles where she used to write stories to amuse her classmates, including an epic novel called “The Beautiful Cassandra” based on a Jane Austen short story of the same name (and  which later inspired her current pen name).

After college, Cassie lived in Los Angeles and New York where she worked at various entertainment magazines and even some rather suspect tabloids where she reported on Brad and Angelina’s world travels and Britney Spears’ wardrobe malfunctions. She started working on her YA novel, City of Bones, in 2004, inspired by the urban landscape of Manhattan, her favourite city. She turned to writing fantasy fiction full time in 2006 and hopes never to have to write about Paris Hilton again.

Cassie’s first professional writing sale was a short story called “The Girl’s Guide to Defeating the Dark Lord” in a Baen anthology of humor fantasy. Cassie hates working at home alone because she always gets distracted by reality TV shows and the antics of her two cats, so she usually sets out to write in local coffee shops and restaurants. She likes to work in the company of her friends, who see that she sticks to her deadlines.

City of Bones was her first novel.

• The Bane Chronicles
1. What Really Happened in Peru
2. The Runaway Queen
3. Vampires, Scones, and Edmund Herondale
4. The Midnight Heir
5. The Rise of the Hotel Dumort
6. Saving Raphael Santiago
7. The Fall of the Hotel Dumort
8. What to Buy the Shadowhunter Who Has Everything
9. The Last Stand of the New York Institute
10. The Course of True Love (and First Dates)
11. The Voicemail of Magnus Bane

• Tales from Shadowhunter Academy
1. Welcome to Shadowhunter Academy
2. The Lost Herondale
3. The Whitechapel Fiend
4. Nothing but Shadows
5. The Evil We Love
6. Pale Kings and Princes
7. Bitter of Tongue
8. The Fiery Trial
9. Born to Endless Night
10. Angels Twice Decending

• Magisterium Series (along with Holly Black)
1. The Iron Trial
2. The Copper Gauntlet
3. The Cosmos Blade
4. The Golden Boy
5. The Enemy of Death