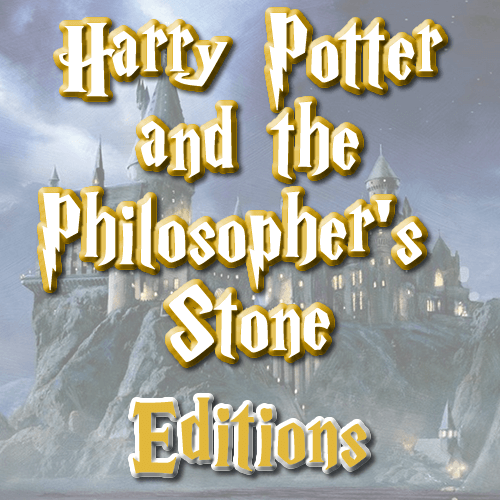 Yes, I know, I’m a little bit late, but as a huge Harry Potter fan I decided to acknowledge this huge anniversary by creating some posts about the book and following later about the whole series. I’ve been a fan for 16 years already! I can’t believe how the time flies.

20 years are a lot and as we know it, there is tons of different editions of the books. In this first post I’m going to showcase some of my favorite covers and some iconic covers. I know that I can’t show you everything – they are just way too much.

I, myself, have 3 copies of the book so far – the first UK edition, the first Bulgarian edition and the UK edition, which was released in 2014. But I do plan to buy some more. My collector heart can’t stop wanting them!

This is the first UK edition of the cover. Year – 1997! I like it, because it shows Hogwatrs Express, but Harry is kind of different from what I’m used to. I have this edition – I found it in a charity store in London, when I visited my sister this January and I couldn’t resist and grabbed it.

This is the first US edition (1998) with the changed title – Sorcerer’s Stone instead of Philosopher’s Stone. I still have no idea why they had to change it, but anyway. This is also the way that looks like the first Bulgarian edition of the book, which I own.

The 15th Anniversary edition in America looks like this! I do like it and it’s awesome that the spines of all the books makes a picture of Hogwarts. Look at it, looks so magical, so real! I want it!

This is another UK edition – released in 2014. The illustrator of this one is Jonny Duddle and it looks awesome. This is my second UK edition that I own and the one I read from when I reread the book these past weeks. Also, the second (and current) Bulgarian editions looks like this, but of course it’s written in Bulgarian.

This awesome beautiful cover is from the e-book edition, which you can find at Pottermore. I can’t resist it. If ever this one goes as printed edition, I’m totally going to buy it.

This is the cover of the gorgeous illustrated edition of the book. Jim Kay is awesome artist and I do adore this book. There’s also Bulgarian edition and I still have no idea which one I want – Bulgarian or English one, so that’s why I still don’t have it. And not to mention that as illustrated edition is much more expensive, so I need to save for it, but I’ll definitely buy it.

Last, but not least – the 20th Anniversary House Editions. Look how beautiful they are. Twice I took the Sorting in Pottermore, twice I’ve been sorted in Hufflepuff, so I assume this is my real House, so I’m going to buy the Hufflepuff edition – the gorgeous yellow paperback for sure and I’ll also try to get the hardback. I saw my local book store had some editions, but only Gryffindor and Slytherin.

So, those were all the covers of “Harry Potter and the Philosopher’s Stone” that i wanted to show you today. Keep an eye in this section as I soon will be writing another post related to Harry Potter!